The Authority’s Revenue Bonds funded the Emergency Communications System, which is comprised of certain real property, improvements and equipment constituting a public safety, emergency, and public services wireless radio communications system (the “System”), using frequencies in the 480 MHz UHF-T band, that replaced the systems previously used by the Members. The System was designed to provide the Members with effective and reliable radio communications for routine intra-agency operations and inter-agency communications during mutual aid and disaster operations within the 606 square miles of the County. Similar projects have been constructed and are operating in the states of Florida and Michigan, the counties of San Diego and Alameda in California and King County in Washington, and the cities of Sarasota, Florida; Portland, Oregon; Cleveland, Ohio and San Diego, California.

The System utilizes 34 frequency pairs in the 480 MHz UHF-T band designated by the Federal Communications Commission (the “FCC”) for public safety and public service use by the Members. The Code of Federal Regulations (CFR), Title 47, Chapter 1, et seq. governs the use of radio spectrum by public agencies.

The System is comprised of a “backbone” of fourteen base station radio and receiver sites, one microwave-only site, and associated equipment; microwave equipment to link the base station repeaters and receivers; communications center console hardware and software; mobile and handheld user radio equipment; radio sites and other leased and owned facilities that support the backbone and associated computer hardware and software that is installed at theses facilities and in public-safety and public-service vehicles. The System encompasses two separate simulcast zones and three repeater fill-in sites. The eastern simulcast zone consists of six transmit/receive sites and two receive-only sites, each with eleven trunked radio channels, and provides radio coverage for the dense urban area along the corridor formed by U.S. Highway 101. The western simulcast zone consists of three sites, each with seven trunked radio channels, and provides radio coverage for the rural parts of the County along U.S. Highway 1. Fill-in radio coverage is provided by three additional sites; one with six channels (Sonoma Mountain) and two with five channels. All sites are linked by digital microwave and leased digital services.. The System is designed to provide seamless radio coverage for users throughout substantially the entire County. View a map of the network installations. 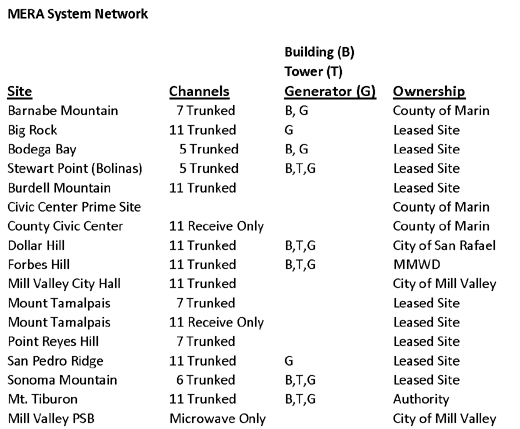 The System was purchased from and installed by Motorola, Inc., pursuant to an agreement executed on December 17, 1998, for a total purchase price of approximately $21.4 million.

The System was completed and is functioning as originally designed. Five additional radio frequencies were acquired and installed by Motorola in 2010 to accommodate an increase in the number of radio users above what was originally projected.